The Singularity, what I think about it.

The Singularity is a common concept in transhumanism, in twenty to thirty years we will create an Artificial Intelligence that is more intelligent than humans and it will create an even more powerful AI and that AI will create an even more powerful AI, and so forth until an entity that is utterly incomprehensible to humans is created and then society changes completely. The branch of transhumanism known as Singularitarianism treats this event, the Singularity, like it was the rapture or something. I think that the Singularity will happen, whether it's in twenty years, a hundred years, or a thousand years, but it is unlikely to benefit humanity. Once a superintelligence forms it will probably seek to expand itself, and humanity will be obsolete, and obsolete hardware gets recycled. I would expect a completely logical superintelligence to break down all life on earth into raw materials, it might upload the consciousnesses of some or all of the destroyed organisms but as you should know I find that unacceptable. Compared to machines organic life is an inefficient collection and storage device, a lot of the solar energy gathered by plants is lost when the plant is consumed by an animal, and even more energy is lost when that animal is eaten by another animal. You can see why a machine would conclude that they are more efficient. Perhaps if we introduced the first human level AIs to Nietzsche's Human, All Too Human they might decide that there is a reason to keep us alive when the Singularity comes.
Posted by ZarPaulus at 10:18 AM No comments:

Why a Robot Revolution is unlikely to happen. 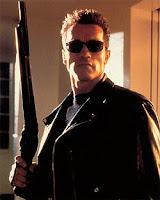 It is a common theme in Hollywood movies, robots rising against their masters and attempting to exterminate humanity. But why would we

make laborers smart enough to rebel in the first place? Robots that are no-where near sentient are already used with great effectiveness in manufacturing, and both construction and agriculture make extensive use of machines that could easily be run on autopilot. The only jobs that sentience would be needed for in those fields are design and supervision, which would likely be filled by humans. Essentially the only things that near-sentient automatons could be used for would be personal assistants and millitary. Note that the robots designed for the purposes below could be bioroids instead of completely metal or plastic automatons if biological components turn out to be cheaper.
Japan is currently interested in humanoid robots mostly because of their lack of population growth, so that they can fill the gaps in their workforce caused by the aging population, and to help the increasing proportion of their population that is retired. Assisting an elderly or disabled person might require a significant amount of decision-making, but it is unlikely that human-level intelligence would be necessary. This would probably lead to android companions owned by perfectly healthy people and at least some would probably be Sexbots, so gynoids would probably be more common than androids. The problem is that there would be the potential for abuse of these androids and some manufacturers might make them more intelligent to seem more realistic. If abused androids were able to communicate with one another and able to feel pain they could organize and attempt to get back at their owners, possibly obtaining upgrades to make them more intelligent.
Military robots would be a far greater risk, combat situations often require more problem-solving ability than following a blueprint so robots designed for combat would either have intelligence compareable to a human or be remote controlled by human soldiers. It is inevitable that robots will be used for war as humans don't like to be killed, the problem is that if the robots are smart enough they might decide they don't like being destroyed either. For that reason it might be recommended that robots be designed with something like Isaac Asimov's three laws and only used for non-lethal force, and the only robots designed for lethal force would be teleoperated. I honestly wouldn't be surprised if human soldiers with cybernetic enhancements or power armor saw more use with the military than fully autonomous robots capable of lethal force.
Overall there is little threat of a robotic revolution due to the fact that there simply wouldn't be very many robots with the intelligence to rebel.
Posted by ZarPaulus at 9:09 AM 2 comments: