Dysgenics vs. the Flynn Effect, which is accurate? 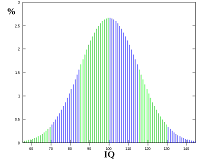 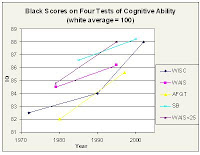 Intelligence quotients have largely been proven to be an accurate assessment of cognitive abilities, but there is some disagreement as to whether IQ is hereditary or environmental and whether average IQ is increasing or increasing. Many eugenicists believe that IQ is largely genetic and since people with lower IQs are less likely to use birth control that the percentage of stupid people is increasing (like in Idiocracy), they call this phenomenon a dysgenic event. However there is much more documentation suggesting that average IQ, especially towards the lower end of the scale, is increasing by at least 3 points every 30 years, known as the Flynn effect. It is known that some genes such as FADS2 and CHRM2 have an influence on IQ, but children from lower income families also tend to score lower on IQ tests. Studies seem to show that environment is a bigger influence in lower income families and genetics is a bigger influence in higher income families, in all cases biological siblings show less variation in IQ than adopted ones. Since living conditions tend to be better (or at least more stable) in higher income households this seems to suggest that IQ might be like height, the upper limit is determined by genes but poor living conditions may prevent one from reaching that limit. It is certainly undeniable that nutritional and educational standards have increased (at least in the west) over the past century, which would account for the Flynn effect. But if there is a genetic upper limit the increase should at least be slowing down, which some think is happening in Denmark and some other developed nations.
Posted by ZarPaulus at 11:43 AM No comments:

The difference between Nietzsche and Transhumanism

On a few occasions Friedrich Nietzsche's concept of the Uebermensch (over-human) has been mistakenly identified with the Transhumanist concept of the Posthuman. This mistake largely stems from the following quote from Thus Spoke Zarathustra: "All beings so far have created something beyond themselves; and do you want to be the ebb of this great flood and even go back to the beasts rather than overcome man? What is the ape to man? A laughingstock or a painful embarrassment. And man shall be just that for the overman: a laughingstock or a painful embarrassment…" While Posthumans could be described as being as far beyond humans as humans are beyond apes or even insects, most transhumanists do not hold the same values as Nietzsche did, in fact many of them seem to prefer something closer to the Last Man than the Uebermensch. The Last Man in Nietzschean philosophy was what Nietzsche believed that European society was currently headed towards instead of the Uebermensch, the Last Man is a weak-willed individual who is tired of life, takes no risks, and seeks only comfort and security, instead of developing new values he embraces nihilism. Whereas the Uebermensch would be almost the exact opposite, one who lives life to the fullest and develops new values to fill the void left by the death of god. Many transhumanists seek a post-scarcity society (no need to work) where people can live as long as they want (free of risks, may result in one getting bored with life). In addition, Singulatarianism is almost a religion, promising escape from this world through the rapture of the singularity, and relief from the suffering of mortal existence by uploading. Those who have been reading here know Nietzsche's attitude on suffering, what you probably don't know is that one of his problems with religion was its denigration of human existence and otherworldliness, which some currents of transhumanism have taken on. This is overall, why I no longer call myself a transhumanist, I have found too many of them to be hopeless idealists or deluded new agers. It probably goes without saying that I would find the Uebermensch a much more preferable future than a post-scarcity society full of Last Men or a relapse into Christo-Buddhist thinking hiding behind the guise of science.
Posted by ZarPaulus at 11:19 AM 1 comment:

This is a strange coincidence.
Posted by ZarPaulus at 4:29 PM 2 comments: